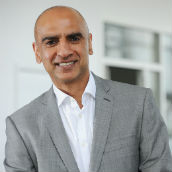 Professor Monder Ram is the director of the Centre for Research in Ethnic Minority Entrepreneurship (CREME) at the University of Aston. Professor Ram has extensive experience in research of and consulting for ethnic minority businesses in the UK and internationally. He has studied, among other things, the employment relationships of migrants and the role of the family in small businesses. Professor Rams areas of particular expertise include ethnic minority entrepreneurship, employment relationships in small businesses and small business policy. He is highly valued internationally for his expertise and has recently been appointed as a visiting professor at the University of Turku. In recognition of his work, Monder Ram has been awarded an OBE. He has also been named as one of the most influential Asians in the UK by the Institute of Asian Professionals.

Read more about Professor Monder Ram’s skills and work as a researcher.